in the world but not of it

So my mind is churning again with questions surrounding the idea that we, as Christians, are supposed to be "in the world, but not of it."

He continues in verses 17-19, "Sanctify them [purify, consecrate, separate them for Yourself, make them holy] by the Truth; Your Word is Truth. Just as You sent Me into the world, I also have sent them into the world. And so for their sake and on their behalf I sanctify (dedicate, consecrate) Myself, that they also may be sanctified (dedicated, consecrated, made holy) in the Truth."

We've been sent into the world, but not without Jesus taking in the time to sanctify us and dedicate us and consecrate us to Him. We've been set apart to God.

I wonder what that should look like. Erik and I have been reading about David in the Old Testament, and it sticks out to me that he is very, very human. (just read through the psalms and see all the times he asks God to crush his enemies!) Yet, he is one of the most honored Christians. God considered him a man after His own heart.

Then I was thinking about the New Testament and the stories we have as examples to live by, and we don't have a ton (especially compared to the Old Testament). What we do have is the book of Acts--which shows us the power available to believers because of the cross. We also have the Gospels and the life of Jesus, our main example.

I read through Mark chapter 11 today and one thought came to my head about Jesus: He was a bit odd (speaking purely from a human standpoint). Within this one chapter, He tells His followers to go take a colt from someone's house without asking anyone for permission, He talks to a tree and tells it to stop bearing fruit (and it listened!), and he answers someone's question with a question of his own, instead of an answer.

Jesus isn't the typical human, and I don't think that I would consider Him the typical super-spiritual person that some might think Christians should be today. He was, though, purposeful. Everything He did had a purpose, even if was the atypical way of doing things. The other thing that stuck out to me was that he was purposeful to spend time alone, praying, with His Father.

Purpose. Jesus' life was filled with it. I'd like mine to be filled with it too. Perhaps that's just one glimpse of what it means to live in the world, but not of it.

On another note, baby is doing well. We're almost a week away from finding out if the baby is a he or a she! Yahoo! We're super excited. God is good! :-)
Posted by laurawegener25 at 6:30 AM No comments:

The passing of a milestone

I'm working, but I have so many thoughts running through my head, I thought I'd take a moment to write them out.

Overall, last week was a rough week. It went really well given the circumstances, but I can tell from the stress my body had throughout the week that it wasn't easy as we remembered Brian's passing last Tuesday. Erik and I visited his grave on Wednesday and were very blessed to see how gorgeous the cemetery is with the fall leaves and how beautiful Brian's marker is. It was a really special moment to be there.

Of course, having the story-oriented mind that I do, I knew we were racing against the clock due to heavy traffic on our way over there. The cemetery closed at 7 p.m. My mind was imagining all the funny (and not-so-funny) stories that would come if we got locked in the cemetery overnight! Okay, sounds funny and slightly morbid, but it brought me a smile in a sad time.

It was really special when we got there because after Erik encouraged me to talk to Brian a bit, Erik said, "Well, aren't you going to tell him?" It took me a minute. Then I realized that I needed to tell him he was going to be an uncle! I knew he already knew, but it was a special moment to tell him in person. I really wish my kids could have met Brian, but we have lots of good stories to tell about him and how wonderful he was, and I know our kids will have lots of people surrounding them who will tell stories too.

When I think about being sad that Brian's not here for my kids, I'm simply grateful he was here to meet Erik and see me get married. Personally, I don't think he would have left if he didn't know for sure I was taken care of. Of course, I wish Erik could have known him better and when he wasn't as sick, but I'm grateful they met and spent some time together.

Making it through last week has definitely lessened my stress levels/emotions... which is good because I have a baby in me to take care of!

On a lighter topic, I bought bedding for our nursery recently! I absolutely love it. And no, it's not blue or pink. We'll find out what we're having in a few weeks. It's pale green and yellow with hints of pinks/purples/blues/oranges and a jungle theme. A shout out to my mom-in-law and sis-in-law who accidentally got our baby similar looking pale yellow giraffes (stuffed animals)... that started the whole jungle theme idea! Excited to put it up, but until it's a little closer, my wonderful mother has it stashed away in my old bedroom (the grandkids room).

Thank you for all the love you've poured out on me and my family throughout this past week. It was overwhelming and very helpful and supportive. I appreciate you, my support system, more than you may know!
Posted by laurawegener25 at 1:06 PM 2 comments:

the start of the second trimester 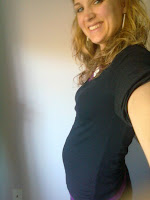 All is well today in the Wegener household. I'm resting at home while contemplating cleaning and making something homemade; Erik's out in the "wild" duck hunting - and he got 2 this morning. Yahoo!!! So excited for him. Tic Tac (that's our baby's name, thanks to my aunt - I forget if I already mentioned that!) is 14 weeks along, and has most of his/her organs developed, even though he/she is only the size of a lemon! Crazy! God made our bodies to be so cool! Tucker is hanging out somewhere, well into his 3rd or 4th nap of today.

Oh and the pic is me right now. Yep, there's a little belly pooch... another pair of regular pants "bit the dust" today. Maternity waistbands are wonderful!!! 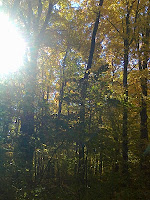 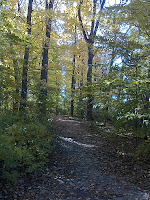 I love the colors fall brings and the crisp air from the breeze. Tucker was pretty mystified by the frost this morning; I smiled thinking about what he'll do when he sees snow again! (And no, I didn't necessarily smile at the thought of snow coming... I just know it will come!)

These pics are from the apple orchard my friends and I went to yesterday. Love it!

I'm thinking I'll go out and enjoy the weather right now and take Tucker on a walk.